Contending For The Faith

By Ken Silva pastor-teacher on Apr 20, 2012 in AM Missives, Current Issues, Features, Mormonism 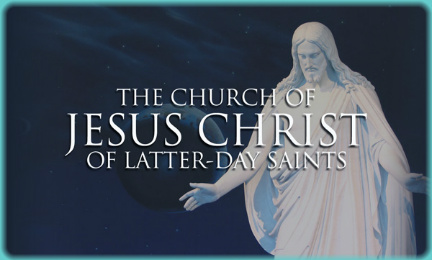 Apprising Ministries is an online apologetics and discernment work the Lord has raised up to help you see the abysmal apostasy spreading now even throughout the mainstream of the evangelical community.
1 Peter 4:17 judgments sent by Jesus Himself are falling upon His visible church as spiritual darkness grows. A good example today is the April 2012 Christian Post piece Romney Not Cultist, Fuller President Says Cautiously.
Therein we’re told Richard Mouw, who in my opinion is an absolutely pitiful example of a Christian leader, continues trying to muddy the waters around the Church of Jesus Christ of Latter-day Saints (the Mormons):


As Mitt Romney’s Mormon faith has become an issue in the GOP presidential nomination race prompting the Latter-day Saints to launch an ad campaign, President of Fuller Theological Seminary Richard J. Mouw has declared, though cautiously, that Mormonism is not a cult.
“While I am not prepared to reclassify Mormonism as possessing undeniably Christian theology, I do accept many of my Mormon friends as genuine followers of the Jesus whom I worship as the divine Savior,” Mouw, head of the Pasadena, Calif., seminary wrote in an article on CNN Sunday.
But can Mormons be called Christians? Mouw said that’s a “complicated question.”
(Online source)

Here, let me once again help out this president of one of the most visible evangelical institutions in the United States: No, faithful Mormons cannot be called Christians; Mormonism is a non-Christian cult, period. And who cares if Richard Mouw’s not prepared to reclassify Mormonism; he hasn’t any authority to do so anyway.
In his day Dr. Walter Martin (1928-1989), author of the classic textbook The Kingdom of the Cults, was a universally recognized expert in the field of Comparative Religion and non-Christian cults having their origins in the United States, such as Mormonism. He wrote:


A cult, then, is a group of people polarized around someone’s interpretation of the Bible and is characterized by major deviations from orthodox Christianity relative to the cardinal doctrines of the Christian faith, particularly the fact that God became man in Jesus Christ.[1]

Martin classified Mormonism as a non-Christian cult because:


The Savior of Mormonism, however, is an entirely different person, as their official publications clearly reveal. The Mormon “Savior” is not the second person of the Christian Trinity,… Mormons reject the Christian doctrine of the Trinity, and he is not even a careful replica of the New Testament Redeemer.

In Mormon theology, Christ as a preexistent spirit was not only the spirit brother of the devil (as alluded to in The Pearl of Great Price, Moses 4:1-4, and later reaffirmed by Brigham Young in the Journal of Discourses, 13:282), but celebrated his own marriage to “Mary and Martha, and the other Mary,” at Cana of Galilee, “whereby he could see his seed, before he was crucified” (Apostle Orson Hyde, Journal of Discourses, 4:259; 2:82)…[and] the Mormon concept of the Virgin Birth alone distinguishes their “Christ” from the Christ of the Bible.[2]

I have pointed out before that I’ve been in the ministry fields of counter-cult evangelicalism, apologetics, and Comparative Religion for nearly 24 years. I even had the privilege to live in—as well as minister to—a very heavily Mormon area of southwestern Wyoming, not too far from Salt Lake City for a good 10 of those years.
Now I don’t recommend this for everyone, however, it afforded me the opportunity to study Mormonism from Mormons themselves; God be praised, I know it as well as they do. With practicing Mormon Mitt Romney running for president of the United States, and gaining in prominence, this religion is in the news once again.
Earlier in The god Of Glenn Beck I showed you that popular devout Mormon is considered by more and more prominent evangelicals to be a Christian. One example would be Word Faith heretic Joel Osteen, whom ER2 Prophet-Pastor Steven Furtick calls a great man of God: Joel Osteen And His Mormon Brother In Christ,
The thing that’s forgotten in all of this is where Beck and Romney will spend eternity for following another Jesus having received a different spirit because they’ve accepted a different gospel (2 Corinthians 11:4) and Galatians 1:6-9 tells us it’s really no gospel at all. We need to give these men a good public Christian witness.
It is not unloving to let the world know that the LDS church is a non-Christian cult and to let someone like Mitt Romney know that, as a practicing Mormon, he is not a Christian. The Christian isn’t left here on this earth to say the politically correct thing; we are here with:


the ministry of reconciliation; that is, in Christ God was reconciling the world to himself, not counting their trespasses against them, and entrusting to us the message of reconciliation. Therefore, we are ambassadors for Christ, God making his appeal through us.
We implore you on behalf of Christ, be reconciled to God. For our sake he made him to be sin who knew no sin, so that in him we might become the righteousness of God.
(2 Corinthians 5:18-21)

Today we see a mistaken idea about Christian “love” as many think that somehow it’s unloving to criticize another person’s faith. And the LDS Church—next to the apostate Church of Rome—is probably the closest counterfeit to Christianity because, as one minister used to put it, “many times they act more like Christians than we do.”
Yes, we are always to approach people with love, but it must be love for our God, for our Savior Jesus Christ, that comes first; and then our love for mankind. As His disciples, we are to love what Jesus loves, but also to hate what He hates. And in the Book of Hebrews God reveals:


But of the Son he says, “Your throne, O God, is forever and ever, the scepter of uprightness is the scepter of your kingdom. You have loved righteousness and hated wickedness; therefore God, your God, has anointed you with the oil of gladness beyond your companions.”
(Hebrews 1:8-9)

In closing this, for now, I’ll show you how all of this relates to the non-Christian cult of Mormonism, which did not even begin until the year 1820. So, this means that for 1,820 years, obviously, the historic orthodox Christian Church said absolutely nothing negative about the Mormon Church for the simple fact that they didn’t even exist!
Then, in 1820–according to the official version of the story (there are 9 different versions)–a 14 year old boy by the name of Joseph Smith says that Jesus Christ appeared to him in person and told him that all of Christianity was “corrupt” and “an abomination,” and that Smith was to “restore the true church” back to the earth.
First of all, they have The Book of Mormon, which is proclaimed to be “Another Testament of Jesus Christ.” But actually, it’s a testament of another Jesus; yet still many people won’t speak out about the Mormon Church because of ignorance, and a reluctance to offend their neighbors, or friends, and family, who might be involved.
Note the following, which comes from the Mormon book of Scripture Pearl of Great Price. Smith’s own testimony, in Joseph Smith-History 1:19, is that he asked the two “personages” which appeared to him (he says they were God the Father and His Son Jesus) which Christian church [read: denomination] he should join.
Below is what Joseph Smith stated: 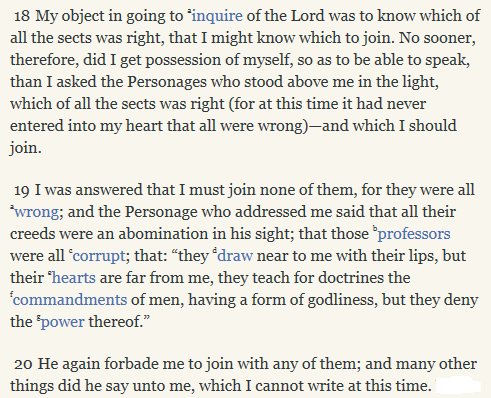 Now I ask you: Who fired the first shot in this war? As anyone can see, it was Joseph Smith, and the Mormon Church! He himself claimed that God personally told him everything the historic Christian Church had believed for 1800 years was “an abomination” in His sight. And further, we who hold these truths are all “corrupt.”
This includes the Holy Trinity; the eternal Deity of Jesus Christ; His Virgin Birth; His precious blood shed on the cross for the forgiveness of sins; our justification by grace alone through faith alone in Christ alone—all of these Biblical truths are “an abomination” in God’s sight—and all of us are corrupt who hold these doctrines dear.
I’d dare say that this type of rhetoric from the founder of the Mormon Church sounds just a tad bit offensive, wouldn’t you? In addition, the Church of Jesus Christ of Latter-day Saints also teaches that God the Father was once a man no different than you or I; and that Satan is the spirit brother of Jesus Christ.
Though they often try and back pedal now, it’s a fact that prophets of the Mormon Church clearly taught that Jesus of Nazareth was conceived on earth through incestuous sex between God the Father and His own child, the Virgin Mary; that the Bible is corrupted and can’t be trusted; as well as man can also become a god.
Not to mention that it’s not right to have a personal relationship with Jesus, nor is it even proper to worship Him. Is that what you believe? Is that what the Bible teaches? Is that even Christianity? Of course it isn’t. Then, for Jesus’ sake, we must go forth and tell them! We must defend His Name and His glorious Gospel!
We were Christians first; and we have defined what that means by the inerrant, infallible Word of God, the Bible. And what kind of madness is this where our evangelical leaders are actually attempting to get into bed with this spiritual harlot who attacked Christ? Hasn’t the real Christian church turned its other cheek long enough!
The Mormon Church uses very deceptive techniques in their advertising, and in their door-to-door approach with their “missionaries,” which fool unsuspecting people into thinking that they are Christians. You should know now that they decidedly are not. Using a military analogy: We can’t afford to just sit by as enemy forces advance.
While Satan, the mortal enemy of men’s souls,“bombs” innocent people with lies about the one true living God; His Christ; His Word—the Bible—and His Gospel, are we really just supposed to say nothing? In warfare troops can’t worry about “offending” an enemy or feel it’s “someone else’s” job; or worse yet, say they’re “too busy”?
That fact is, spiritual darkness is spreading over the landscape and the church visible must awaken from slumber and begin to once again follow the directive of our great “Commander of all commanders,” Christ Jesus the Lord. He orders us in Jude 3 to contend earnestly for the faith which was once for all delivered to the saints (NKJV).
Let’s now mobilize our Lord’s forces and lift up the banner of Jesus Christ of Nazareth—our great God and Savior—for the whole world to see! For he who is in you is greater than he who is in the world (1 John 4:4). Might we give ourselves completely to the Lord that He use us to rescue those lost in the twisted kingdom of the cults.
___________________________________________________________________________
End notes:
[1] Walter Martin, The Rise Of The Cults [Santa Ana: Vision House, 1980] , 11, 12, italics his.
[2] Walter Martin, The Kingdom of the Cults, Ravi Zacharias, Gen. Ed. (Minneapolis: Bethany House, 2005), 252, emphasis mine .
See also:
THE MORMON CHURCH, INCEST, AND JESUS CHRIST
THE CHURCH OF JESUS CHRIST OF LATTER-DAY SAINTS VS. THE GOSPEL
NATIONAL ASSOCIATION OF EVANGELICALS SEEKS COMMON GROUND WITH MORMONISM
Posted by kshirley at 7:23 AM

Stand Up for the Truth